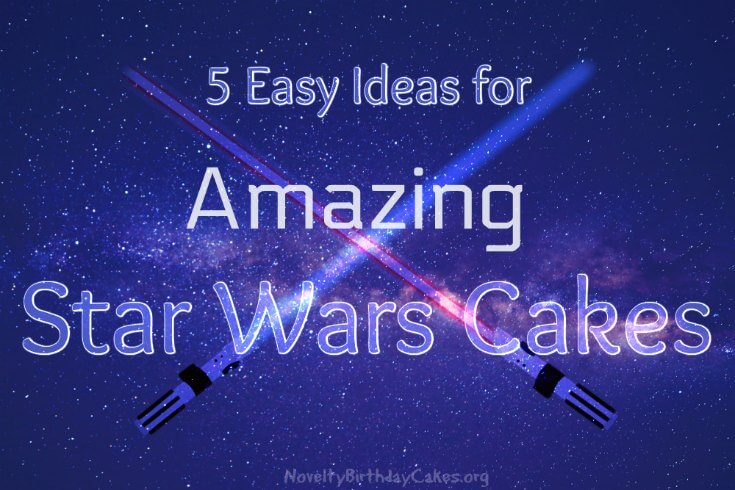 Those Star Wars movies just keep coming, and as a result, so do the requests for Star Wars cakes.  With some many great characters, vehicles and robots, there is also plenty of inspiration.

One tricky part about Star Wars cakes that puts many people off is the level of detail.  But there are a few ways to get around this and still make an amazing cake.

Here are 5 ideas for making a Star Wars cake that will look amazing that anyone can try at home.

This is super simple, even for anyone who considers themselves not creative.  Basically you cut the cake/s to the shape of the character you want.

You will need the usual things to make your cake/s (here’s my favorite birthday cake recipe) plus a guide of some sort to help with shaping the cake.  This could be a stencil, picture or model of the character/object you are making.

From there, bake the required size and shape of cake (you might even need more than one), then cut or carve the character/object out of the cake. The beauty of this method is you can make the cake as big or small as you like, plus any flavor can be used.

Sometimes you will need to create several pieces and join them together.  But once put together, iced and decorated, it is all one piece.  Here’s a couple of examples.

Starting with a 1 x rectangule and 1 x round cake, R2D2 can begin to take shape with some careful cutouts. 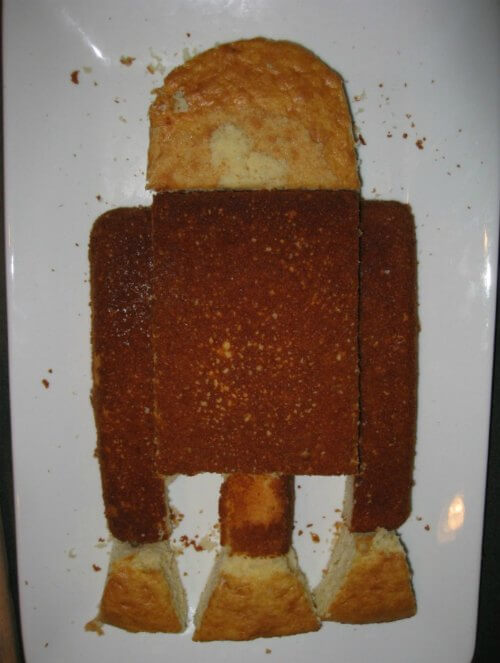 Once assembled, it’s time to ice and decorate using a picture or model to give the detail.  Here’s what you get… 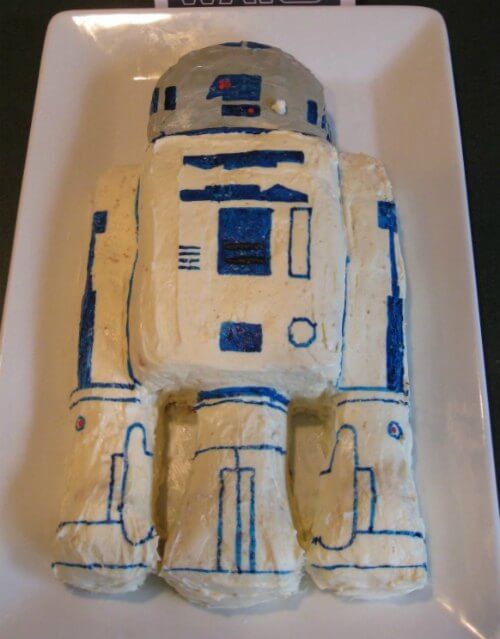 This cake idea is via Nest of Posies.

This one is even easier as only one cake needs to be baked and the cutting is straightforward.  Use a cookie cutter for the ears. 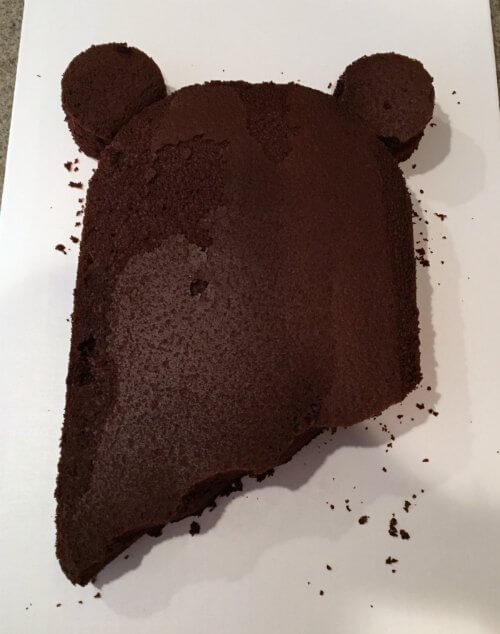 And then ice and decorate.  Very cute. 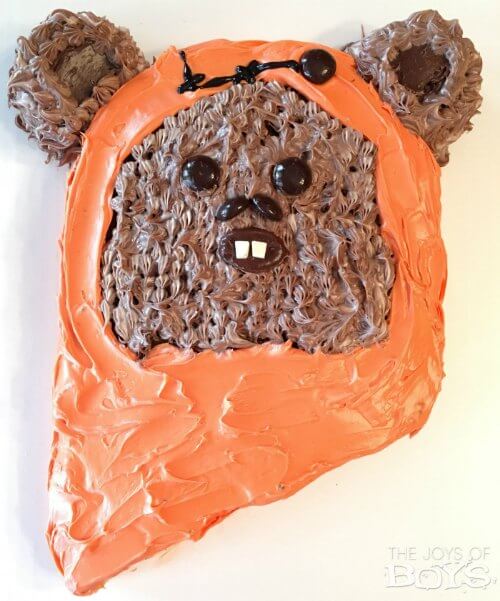 This cake idea is via The Joys of Boys. 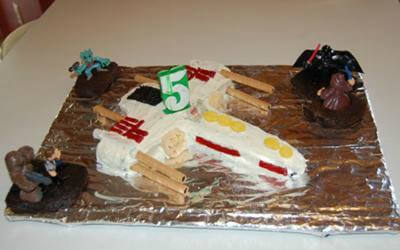 Idea 2 – ‘Draw’ The Character Onto The Cake

This is a simple formula that you can read more about here.  It’s one I’ve used time and time again and it’s always a hit.

For this you will need a stencil, printable, drawing and/or a steady hand to help draw the character/object onto the cake.  Finding stencils and printables is easy with a bit of googling.  Here’s a couple to get you started:

Darth Vader stencil via Sewing Rabbit, Yoda stencil via Free Stencil Gallery (they have lots of others too so search around.  Here’s Darth Maul). Death Star stencil via Baby Center  (click on the image to open the printable).

Here’s some examples of Star Wars cakes that have used this technique.

Simple but very effective particularly with the colors chosen.  This one is from Boyish Charm. 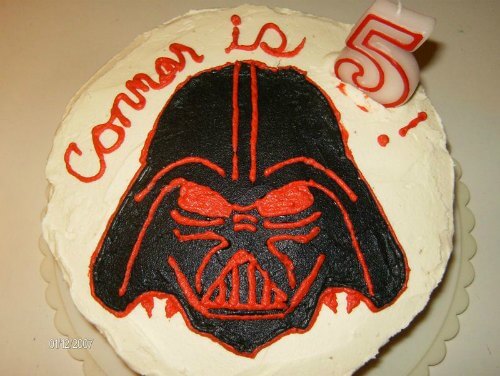 A variation of this idea is to dust the stencil outline with icing sugar.  It gives a great effect, particularly on a chocolate cake like this one via PolishJediArt. 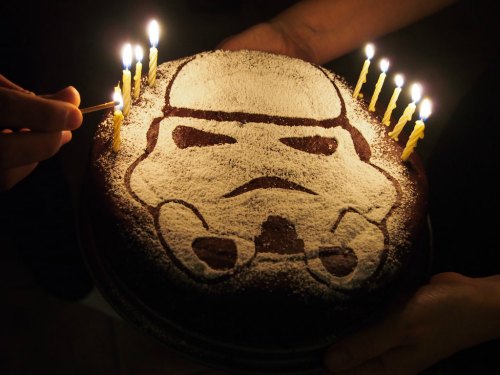 This is an adaptation of the idea above.  Instead of decorating straight onto the cake, cut out your character in fondant and then place it on top.

Here’s a great example of this for a Yoda birthday cake from Sweets by Sue. 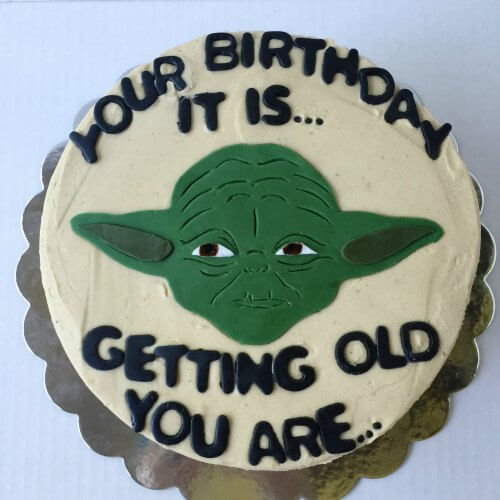 Make Me A Cake has a detailed tutorial on how to use a stencil to create a fondant cut out.  Here’s the result for a Darth Vader Cake. 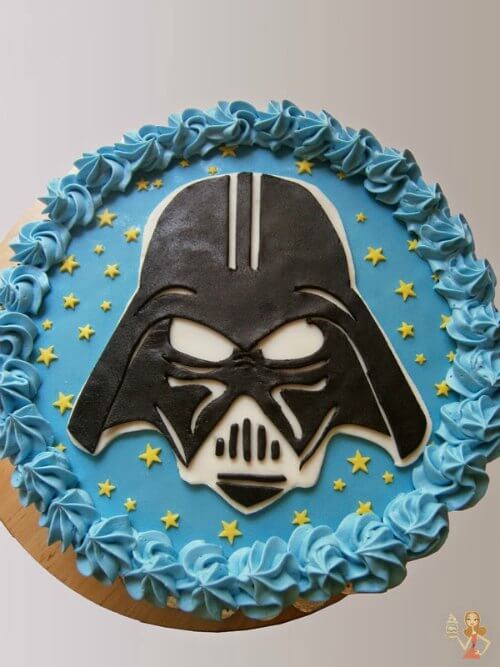 There are many infamous Star Wars scenes that can be recreated using figurines, toppers and a bit of imagination.

An epic scene, an epic battle and this is an epic cake from One Perfect Day Blog. 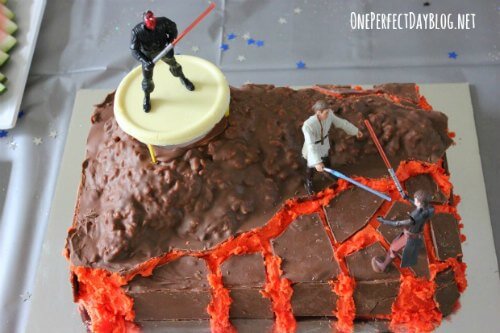 It’s actually some rice crispy treats combined with chocolate cake and lots of chocolate.  Like I said…epic.

It looks like there is a lot going on here, but it’s mainly just crackers, candy and chocolates cleverly put together. 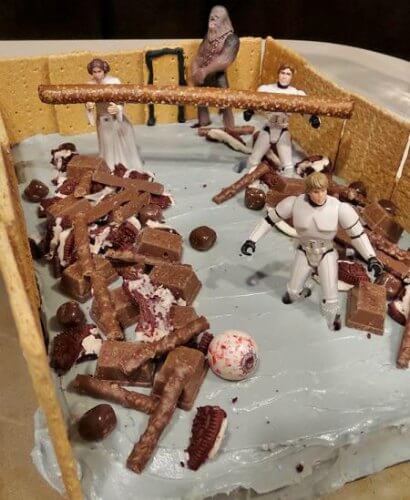 Cake inspiration from This Tasty Life.

Using several cakes, a large cake board and lots of frosting, this cake was put together in less than an hour! 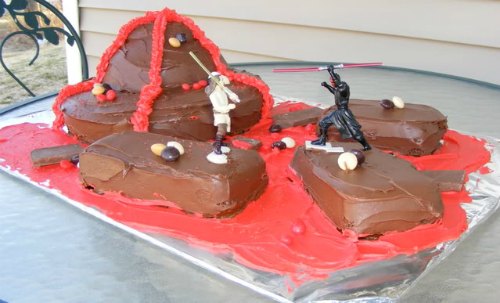 Cake idea via The Happy Housewife.

If all the above ideas seem too daunting, try using a character shaped pan.  These will give the perfect shape and detail to make a great cake.  The pan will usually come with detailed instructions to guide you every step of the way.

Here’s an example of a cake made this way. 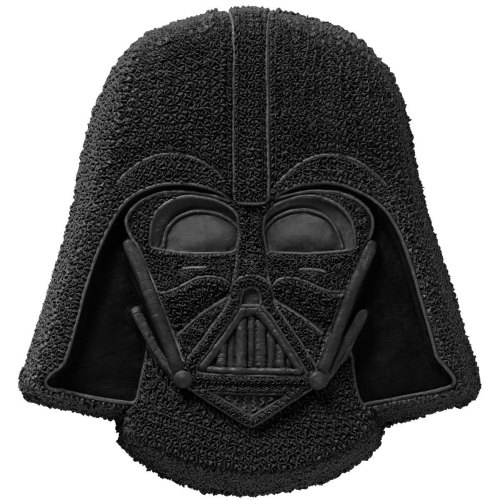 This cake was made using the Wilton Darth Vader pan.  See the steps for building a cake like this at Sheri Lynn’s Cakes.

Other Star Wars pans you can buy include R2D2, BB-8, and Stormtrooper.

Even if you don’t believe you are creative, any of the ideas above can be tackled at home.  Before you get started be sure to check out my secrets for decorating cakes.

I hope the ideas give you inspiration to make a Star Wars cake some time soon.  Whoever you are making it for will be delighted, even if it isn’t perfect.  Plus, you’ll have a lot of fun along the way.